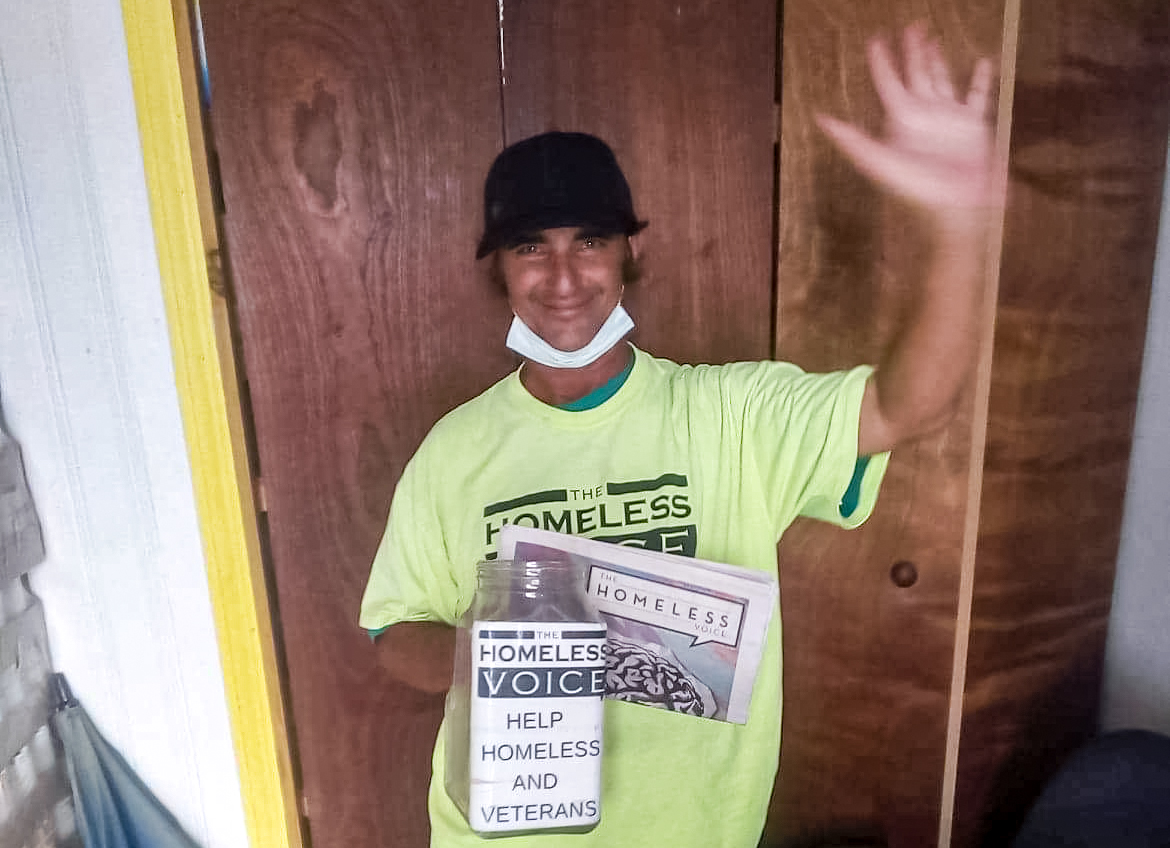 Q&A session with Homeless Voice vendor Fred Wucher about why he vends, how he starts, and who he helps.

HV: How long have you been vending?

Wucher: I started with it around November of 2010

HV: What made you start vending?

Wucher: I had some tough economic times where, unfortunately, the company I was working for, Domino’s Pizza, was actually cutting out some of its drivers. And, of course, I was one of the ones that they had to cut. You know, they had to do what they had to do. You either return a profit or shut that store down, and I’m okay with that.

So I found myself living in [the COSAC Shelter in] Hollywood, and within a week I was first put on the road as a vendor.

HV: Have you had any bad experiences while vending?

This was in Coral Springs one time, it was a guy in a work van. I think it was one of those Chevy Express full size vans. I had never been to that corner before and he goes, “We’re getting tired of you blah blah blah.” Well, I just told him, “Happy Holidays!” This was just before Thanksgiving 2010, so it was right around the holiday season. A week later, I saw the same guy. He rolled the window down and apologized to me. He said to me, “I am so sorry about what I said the week before, I just had a bad day.” And I just said to him, “That’s okay. Happens all the time.”

HV: What makes you want to keep vending?

There was a time when I would think about leaving once in a while because sometimes I would get a little burned out, a little sad. Then after thinking about that, I would turn around, look at all those people that were sitting on the porch [of the Hollywood shelter], and then I would ask myself, “Freddy, Do you really want to do this to them?” Then, I just found myself not knowing how to turn my back on them. I just couldn’t do it. I just didn’t have the heart to turn my back on those homeless people that were there.

HV: Why did you feel like you would’ve been turning on your back had you left?

Well, for starters, then I would have only been thinking only about myself — that’s how I thought about it. The Homeless Voice is not about me, it’s about helping people. If I can’t think that way then I shouldn’t be doing this. That’s one thing I’ve always let my brother and sister vendors on the van know: This is not about us. It’s about helping people. If we think that [it’s about us] then we may as well pack up and close up shop.

HV: So for you, you see the money as helping other homeless people?

Yes I do. I also see it keeping the program open or keeping the agency open, so this way if a homeless person does need a place to stay, it’s there for them. That’s what it’s all about.

HV: It sounds like you’re really there for everyone at the shelter in a personal sense too.

It’s kind of a personal thing because I remember when I was homeless — and this was a long time ago — there had been times when I had been sleeping on somebody else’s couch, [or] not knowing whether I was gonna have a place to stay or not. And then I said to myself “Freddy, you need to stop living like this.”

HV: Why are you so passionate about vending?

I remember an old saying by John F. Kennedy, “Ask not what your country can do for you — ask what you can do for your country.” Right now about 11% of all homeless people are veterans who put themselves in harm’s way for all of us and God only knows whether they’re having suicidal thoughts or thoughts of hopelessness. Some are still thinking like they’re either still in Iraq or Afghanistan, or that they’re still in Saigon. I mean, these are people who put themselves in harm’s way for all of us. We the people owe it to them to treat them better. That’s how I see it. It says on the bucket that I use, while I’m working in Jacksonville, “Help Homeless and Veterans”.

I also remember a time when I used to work as a manager for Pizza Hut years ago.

One night I was closing up shop. When I saw a homeless man come in front of my store. He said he wanted something to eat. I said, I have no problem with that, we’ve had three canceled orders. The only thing I asked of him was to help make sure that the front of my store was clean. No beer cans, nothing like that. The next morning when I came into work. I was so surprised. There was not one beer can, all over the parking lot or anywhere on the property in my store or in front of the other stores on the same street of shops. At least six months later, the same homeless man came to me, introduced me to his bride to be and he mentioned to me that he had gone back to school and things like that. That he got himself into a temporary shelter. Got his life back together and he thanked me for that meeting. He was so honored that he even asked me to be best man at his wedding. That’s where I felt really honored. I didn’t think that homeless man would ever come back, but he came back. But somebody who was well on his way towards getting back into society the right way.