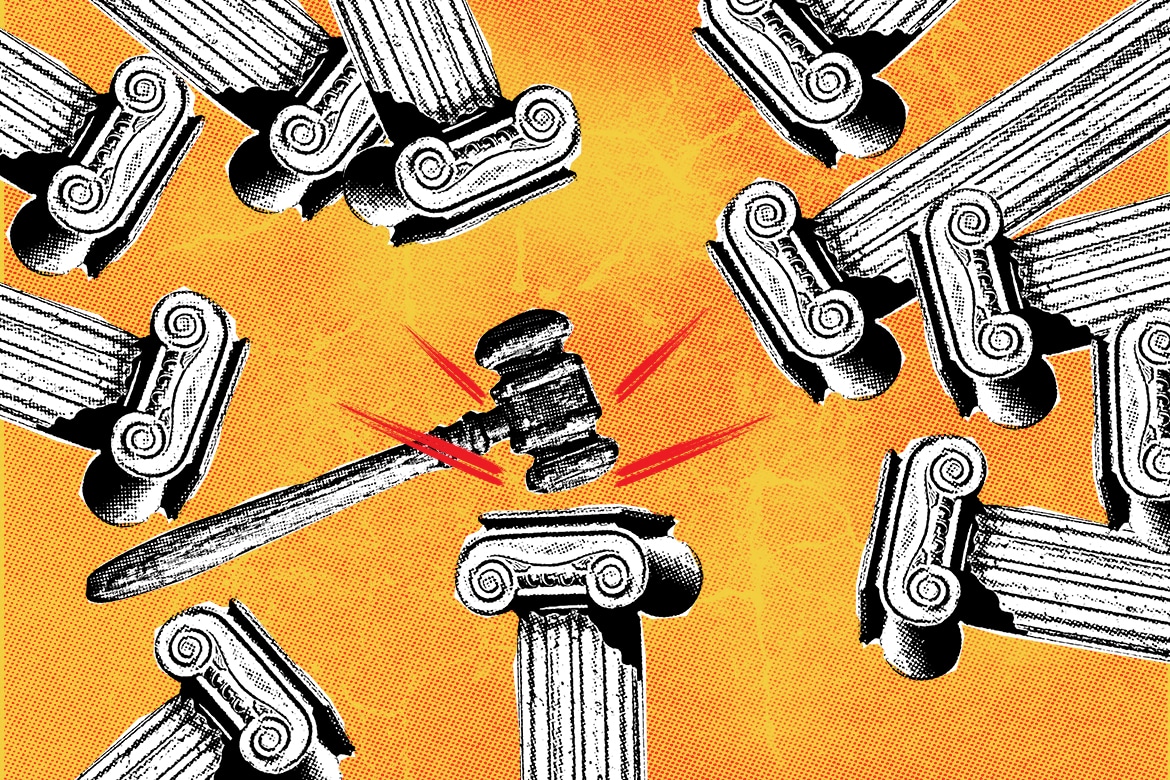 Yet another Florida city, Ocala, is being sued over anti-homelessness laws, under what the ACLU is calling “unconstitutional” ordinances, continuing a pattern of criminalization, lawsuits, and repeal.

The first amendment guarantees a right to free speech. That speech might be your opinion, or asking for help — sometimes more specifically, asking for money. This last part is the snag that has kept the lawsuits coming in for many Florida cities over the years, but most recently to the city of Ocala.

The American Civil Liberties Union (ACLU) of Florida and Southern Legal Counsel of Gainesville filed a joint lawsuit in April against the city for “unconstitutional” panhandling laws. But this is far from the first time a Florida city has been sued for similar claims of unconstitutional ordinances harming the unhoused, and it shows a pattern of passing these laws, being sued, and eventually being forced to repeal.

According to the ACLU, the current lawsuit’s six plaintiffs — Roger Luebke, Kimberly Burnham, William Anthony Taylor, Victor Hoyt Cox, Dustin Damico, and Patrick McArdle — who are currently or formerly homeless, are accusing the city’s panhandling ordinances as being “unlawfully vague,” and criminalizing the unhoused for asking for help.

According to lead counsel Chelsea Dunn of Southern Legal Counsel, they’re being “jailed and assessed fines for acts as harmless as asking a stranger for a cigarette.”

Specifically, they say the city is infringing on their First and 14th Amendment rights by arresting people based on the content of their speech — asking for help, when, in other situations, it would be legal — and a lack of due process.

“Ocala’s law is not unique, and it is as unconstitutional as other similar ordinances that courts have struck down throughout Florida and throughout this country,”  said Jacqueline Azis, a staff attorney with the ACLU of Florida.

These past lawsuits that Azis alludes to have been similarly based around the violation of civil rights — defending panhandling as free speech, as well as accusing cities of cruel and unusual punishment for camping bans and other criminalizing ordinances.

Fort Lauderdale, for example, was sued in 2015 by the city’s local Food Not Bombs chapter for an ordinance that restricted sharing food without a permit, and then only within certain bounds — functionally criminalizing feeding the homeless. The lawsuit argued that the ordinance restricts free expression, as Food Not Bombs distributes free food to protest the funding of war over solving hunger, not as charity.

The U.S. Court of Appeals for the 11th Circuit eventually ruled in 2018 that the sharing of food was considered “expressive conduct” and protected by the First Amendment.

The City of Sarasota was also sued in 2015, this time by the ACLU on behalf of several homeless plaintiffs. Separate city ordinances criminalized sleeping outside, which the ACLU said violated the Eighth Amendment’s prohibition on cruel and unusual punishment, and panhandling, which violated the First Amendment’s right to free speech.  According to the ACLU, within the two years before they sued, the city had already “brought 882 criminal prosecutions against the homeless” for sleeping outside and in public parks after hours.

It was not until 2017 that an agreement was reached in that lawsuit: if no beds are available in the Sarasota Salvation Army — the only shelter that met the standards set in the lawsuit — the city cannot enforce the ordinances challenged.

Tristia Bauman, an attorney at the National Homelessness Law Center who is not involved in the current Ocala lawsuit, told the Homeless Voice, “The laws generally being challenged are generally the same.”

And, to her point, Fort Lauderdale was sued again in 2015 — by the ACLU and Southern Legal Counsel — this time for homeless encampment raids.

According to the ACLU press release, in May 2015 Fort Lauderdale city workers came to a homeless encampment with dump trucks and seized and destroyed the belongings of those who weren’t there, or couldn’t pack fast enough. The ACLU and Southern Legal Counsel filed suit the next month saying the raid violated the U.S. constitution’s “protections against unreasonable seizures of personal property, as well as the guarantee of due process.”

While the lawsuit was not resolved in court, the city agreed to settle by paying all legal fees and paying $82,020 to the plaintiffs for damages.

“Taxpayers pay for the process of enacting the law that will not serve the public interest, and to enforce that law, and ending it when it is challenged in court,” says Bauman, referring to these ordinances that continue to be found problematic.

“What’s crazy is the idea that pushing someone from one street corner to the next, or one neighborhood to the next, does anything to address public health and safety, which is usually the purported justification for exacting criminalization strategies or conducting a sweep,” Bauman continued.

This year, in 2021, Fort Lauderdale was sued yet again. The Florida Justice Institute (FJI), along with lawyers Mara Shlackman and Frantz J. McLawrence, filed suit against Fort Lauderdale for their panhandling ordinances, calling them “an unconstitutional restriction of free speech.”

They bring up similar points as the ACLU and Southern Legal Counsel’s lawsuit against Ocala, pointing out that Fort Lauderdale’s panhandling ordinance functionally restricts content of speech by only restricting asking for money or help. As of publishing, there has yet to be a resolution.

“Taxpayers pay for the process of enacting the law that will not serve the public interest, and to enforce that law, and ending it when it is challenged in court,”

These are all examples of the same laws, criminalizing the homeless in the same ways, repeatedly being challenged across the state.

To Bauman and the National Homelessness Law Center, these laws originate from “wholly ineffective…short-term responses” to public complaints on visible homelessness. She says that rather than address the root causes of homelessness, communities push law enforcement to try and make visible homelessness “invisible, or at least attempt to do so, and that’s why we see all kinds of different forms of punishment.”

In the ACLU’s press release on the coalition’s warning, they cite the 2015 Supreme Court decision in Reed v. Town of Gilbert, the basis for their combined effort against panhandling laws. The decision led to the legal basis of panhandling being protected as free speech, and, according to the ACLU, since 2015, “100 percent of lawsuits against cities with panhandling bans have been successful.”

“Every Florida city and county that has an ordinance prohibiting individuals from requesting aid from fellow human beings should immediately stop enforcement and initiate repeal,” said Kirsten Anderson, the director of litigation at Southern Legal Counsel, in the press release. “This is not a solution to homelessness.”

And yet, cities continued to create and enforce these ordinances with varying tactics and strategies. Some of these failed strategies, according to Bauman, “…are tried over and over again, under different laws that are modified.”

Before that year, Orlando’s “solicitation” laws restricted panhandling to certain times of days and specific areas on the sidewalk. Then, in 2017, they proactively changed the ordinances so as to keep their panhandling laws, but abide by the understanding of the court’s 2015 decision. Panhandling is legal almost any time and any place now, but still has restrictions such as not being able to solicit from a car at a stop-light.

Orlando made their panhandling ordinance less criminalizing, but that is not the point according to Bauman: “Not the point if we’re policy making to solve the problem of homelessness, but it is the point if communities are trying to use the power of the law to chase visibly poor homeless people from the public view. And that’s why they will be amended not to improve the situation, but to legally respond to those complaints.”

The current Ocala lawsuit is only one example of this pattern in city ordinances attempting to criminalize the homeless population rather than help.

The ACLU and Southern Legal Counsel give a specific example of tactics used by the city in their lawsuit, describing Ocala “police operations targeted at ‘quality of life’ violations, including panhandling.” Named “Operation Street Sweeper and Operation Innovation,” they lasted a year and had plainclothes officers patrolling “Downtown” and “Midtown” Ocala “to observe ordinance violations such as panhandling.”

When asked about this pattern, Bauman says, “I do see the cycle of punitive approach, push-back, renewed or slightly different approach, occurring all across the country.” She says it could be in the form of simply replacing a court challenged ordinance with a reworded one that still restricts “life-sustaining conduct,” or by just changing the nature of the punishment, like from a criminal offence to a civil offense.

“Governments seek, too often, to abuse their power of regulating public space to exclude disfavored groups from public view. It could be homeless people which it often is, but it can be other groups of people too,” continued Bauman. “Historically, really, anti-homeless laws are cut from the same cloth as Jim Crow laws, or the sun-down town laws.”

“You know it’s all about keeping disfavored groups from being able to enjoy public space in the same way that the rest of us do.”

The Ocala Police Department did not respond to a request for comment on the ongoing lawsuit.