Opinion: Florida’s Minimum Wage Increase is Too Little, Too Late 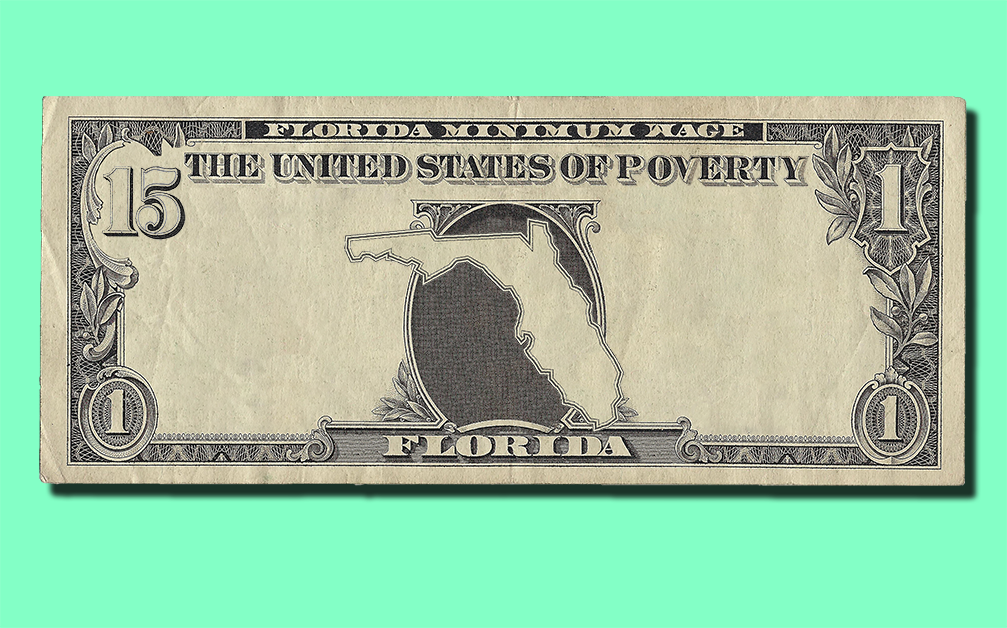 Raised in last election, Florida’s minimum wage workers won’t actually see $15 per hour until 2026, and by then it might not be enough.

Florida’s approval in this election of increasing state minimum wage to $15 an hour will help hundreds of thousands of workers — in four years. Maybe.

According to MIT, a “livable wage” for Floridians, as of 2020, is about $12.39 an hour. Current minimum wage in the state is far less at $8.56, and not until almost a year after the vote will the initial jump to $10 even begin — not until 2024 at a one dollar increase per year will the 2020 livable wage even be reached. Florida is joining many other states in their plan towards $15 an hour, which at the initial $10 will still help many people, but also highlights the reality of the high cost of living that minimum wage workers have faced for years before this election and will likely continue to face.

“The living wage is the minimum income standard that, if met, draws a very fine line between the financial independence of the working poor and the need to seek out public assistance or suffer consistent and severe housing and food insecurity,” according to MIT’s Living Wage calculator. “In light of this fact, the living wage is perhaps better defined as a minimum subsistence wage for persons living in the United States.”

Their calculator uses Fair Market Rents (FMRs) — which “represents the cost to rent a moderately-priced dwelling unit in the local housing market” — and local utility prices to determine housing costs. For a studio apartment in Florida in 2020, it’s $9,981 per year, or about $832 per month. The average single adult with no kids earning Florida’s $8.56 an hour minimum wage will spend 56.1% of their roughly $17,800 salary — before taxes — on this housing cost. With the living wage of $12.39, they would only be spending 38.7%.

According to The National Low Income Housing Coalition (NLIHC), a non-profit that aims to end the affordable housing crisis through policy and data research, anything upwards of “the generally accepted standard of spending no more than 30% of gross income on rent and utilities,” is considered unaffordable housing though. This brings needed wages, according to NLIHC, even higher than MIT’s livable wage that already lies on the razor’s edge of financial independence and public assistance.

At the rate of Florida’s minimum wage increase, it will still be years until 2020’s livable wage is achieved.

MIT specifies that the calculation “accounts only for the basic needs of a family. It does not account for what many consider the basic necessities enjoyed by many Americans,” such as eating-out and other forms of entertainment, but it also “…does not provide a financial means for planning for the future through savings and investment or for the purchase of capital assets.”

And this is for single adults without children. A single adult with one child brings the livable wage from $12.39 an hour to $25.47.

NLIHC’s 2020 “Out of Reach” report uses “housing wage” as the wage a full-time worker must make to afford FMRs without spending over 30% on rent. For Florida, this is $24.43 an hour for a two-bedroom apartment — 2.9x what a minimum wage worker currently makes. This is a much more valuable wage than MIT’s comparable $24.18 an hour “livable wage” for a two-bedroom apartment — spending only 31.9% on housing — as MIT’s wage supports two adults (one working) and one child, which is, again, only enough to be on the brink of financial ruin.

Based on NLIHC’s metric, no housing in Florida is actually “affordable” to a minimum wage worker, and MIT’s base “livable wage” is just shy of reaching the ability to “afford” housing for Florida. At the rate of Florida’s minimum wage increase, it will still be years until 2020’s livable wage is achieved.

Comparing to other states, both California and Oregon will reach their base “livable wage” by 2022 due to their previously implemented increases in minimum wage; Illinois will reach “livable wage” by 2023 with a similar implementation of gradually increasing to $15 per hour; Arizona is only one cent per hour away from their livable wage as of this year; Washington state surpassed it’s livable wage this year; this isn’t even considering other states with minimum wages that are already much closer to their livable wages than Florida.

Reaching these “livable wages” is not a crown achievement though, it’s still “better defined as a minimum subsistence wage…” according to MIT; it fails to afford these workers the surplus income needed to save money, and these wages still all consist of high percentages paid to housing, none making housing “affordable” to NLIHC’s definition of costing only 30% of salary.

Florida’s vote to initiate a $15 minimum wage will be life-changing for many workers, but will take so long that it can’t be clear that the “livable wage” won’t go up. MIT states that they don’t keep historical data for this reason: “It is challenging to predict future living wages as key variables (e.g. cost of living and expenses) change year to year, sometimes unexpectedly.” MIT updates the “living wage” the first quarter of each year.

Some of this change can be seen with FMRs, which don’t include utilities and other costs though, so are not directly comparable to MIT’s housing costs calculated for a “livable wage.” According to Housing and Urban Development FMRs for Florida, a studio apartment was $605 per month on average in 2014, and 2021’s is already predicted to be higher at $771 than 2020’s $743 — increasing since 2014 at an average of an additional $294 per year for total yearly rent.

The last time there was an amendment on the ballot to increase Florida’s minimum wage was 2004, which passed, raising it from $5.15 — federal minimum wage at the time — to $6.15 according to Ballotpedia. From then on it was indexed to inflation each year. This leads to the final increase in minimum wage in Florida before this year’s ballot measure being $8.46 to $8.56 on January 1, 2020 — $3.83 per hour lower than MIT’s calculated “livable wage” for the state.

The existence of both state minimum wages and a federal minimum wage — which in 2020 is $7.25 per hour, raised from $6.55 in 2009 — along with an actual defined poverty level — set at $12,760 for someone under 65, just $2,320 a year below the federal minimum wage’s salary of $15,080 before taxes — would imply that these wages are what everyday workers actually need to survive. But really, what low-income workers need differs across the vast areas these minimum wages encompass.

These minimum wages are incredibly rough estimates of pay a worker needs, often outdated from rent prices rising, inflation, and general cost of living rising. The purpose of a minimum wage was to maintain “the minimum standard of living necessary for health, efficiency, and general well-being of workers…”, initially created by President Roosevelt in 1938 as the Great Depression was in full swing. But in 2016 dollars, the federal minimum wage’s buying power has decreased by a third since 1968.

With Roosevelt’s purpose for a minimum wage in mind, Florida is sorely lacking. For the next six years, Florida will be playing catch-up with the other states, wages slowly approaching what’s necessary for people to survive, even as the costs of living and inflation rises ever higher. The $15 per hour minimum wage increase will undoubtedly help many people, but it might be too late too late to reach an actual “livable wage.”