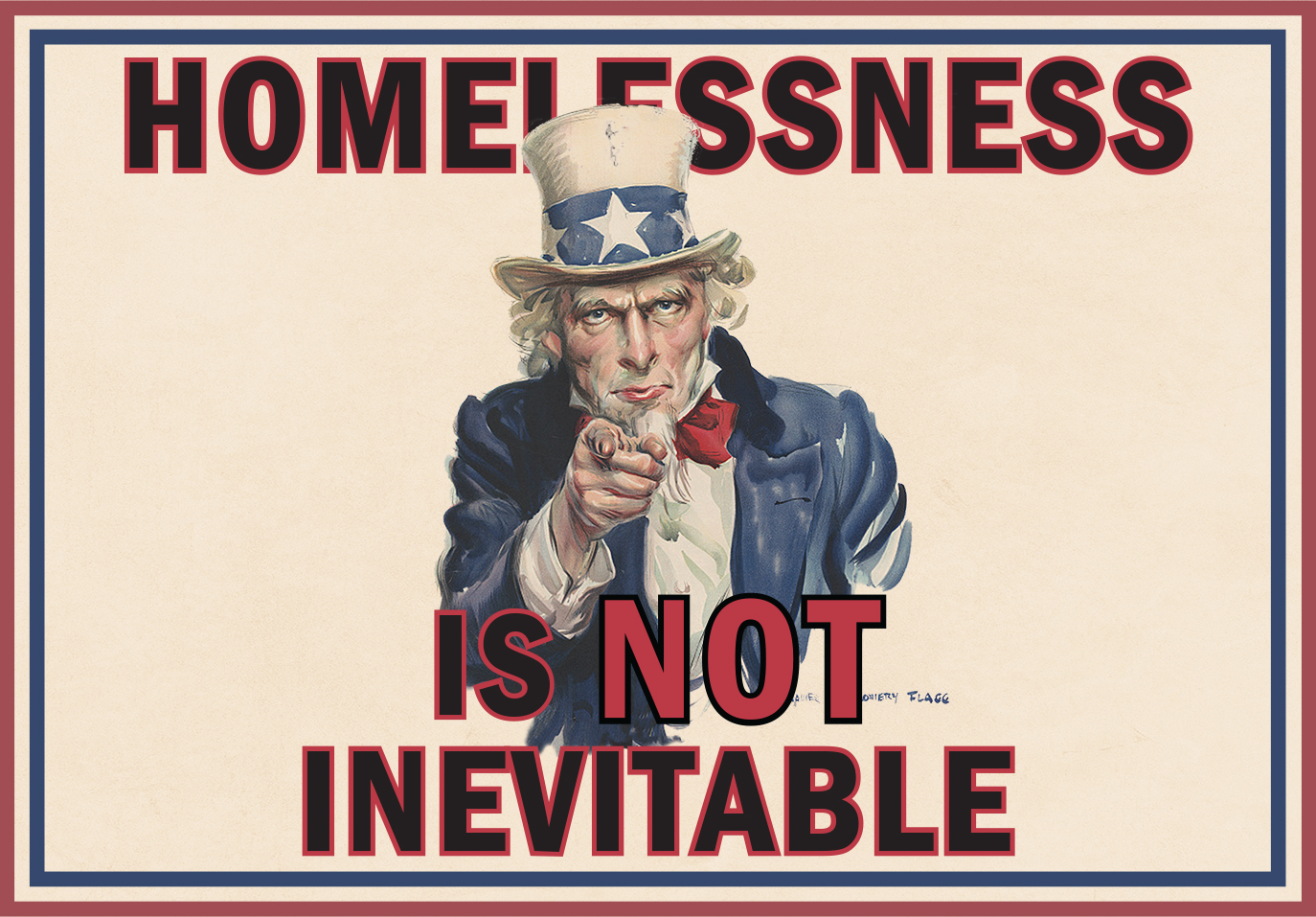 The United States has a history of criminalizing “undesirables,” and this mentality is stopping people experiencing homelessness from getting the help they need.

Homelessness is not inevitable. It doesn’t happen only one way, there is not one solution, and it is not inherently bound to happen. It is the product of a country’s policies, of their mentality about mental health and addiction; it is dependent on how a country helps those who need it, and who cannot help themselves.

The state of homelessness in the U.S. is the result of the mentality of the people and the laws enacted because of it. The way they are treated, the way they got to where they are, and their lack of help — it’s the efforts and failures of their states, their society and their neighbors.

Laws against “vagrancy” and being in poverty have existed in the U.S. — in some form — since colonists came from England, where they had existed since the 15th century. In the late 1800s, some laws became more specifically aimed at hindering the ability of freed Black slaves to wander and find work, such as the Vagrancy Act of 1866 which “forced into employment, for a term of up to three months, any person who appeared to be unemployed or homeless.” In the words of the commanding general in Virginia at the time, Alfred H. Terry, it was “slavery in all but its name.”

This law specifically was on the books until 1904, when it was replaced by “An Act in Relation to Vagrancy, … making vagrancy a misdemeanor punishable by a bond payment and good conduct for one year.” An improvement from a rewritten form of slavery, but criminalization nonetheless.

By 1949 “vagrancy” was illegal in every state, with these laws further developing to the point of criminalizing behaviors as simple as habitually walking the streets at night. The laws were vague and overly justifiable, and essentially gave police the discretion to enforce and discriminate however they like fully under the law.

Later in a dissenting opinion the court would say, “A presumption that people who might walk or loaf or loiter or stroll or frequent houses where liquor is sold, or who are supported by their wives or who look suspicious to the police are to become future criminals is too precarious for a rule of law.”

A major form of discrimination from the police using vagrancy laws was against “undesirables,” whom they’d commonly arrest for vagrancy to enforce social order. As a Time piece puts it: “Over time, states and localities deployed and retooled vagrancy laws for use against almost any—real or perceived, old or new—threat to public order and safety. The officer on the beat in the 1950s and 1960s saw such threats everywhere, in the ‘queer,’ the ‘Commie,’ the ‘uppity’ black man, the ‘scruffy’ young white one.”

These laws became weapons wielded against those “the public” might look down upon, arresting without probable cause, and for reasons possibly out of the people’s control — lie joblessness.

In the same dissenting opinion, the court said, “Arresting a person on suspicion, like arresting a person for investigation, is foreign to our system, even when the arrest is for past criminality. Future criminality, however, is the common justification for the presence of vagrancy statutes.”

The base of these arrests were the people themselves of course, and with laws allowing the police to arrest those not seen as proper in society, it further worked against people experiencing homelessness solidifying the stereotypical attributes assigned to them — the public perspective that they were lazy, drunks, or that their issues were wholly their own; a mentality that is still held onto today.

A discriminatory law that eventually gained attention, and which the previous dissenting court opinions come from, was an ordinance in Jacksonville, Florida.

It criminalized almost two dozen types of vagrants including “rogues and vagabonds, or dissolute persons who go about begging, common gamblers, persons who use juggling or unlawful games or plays, common drunkards, common night walkers, … lewd, wanton and lascivious persons, … common railers and brawlers, persons wandering or strolling around from place to place without any lawful purpose or object, habitual loafers, [and] disorderly persons.”

Police discretion was so broad from this law that in one situation a man “was charged with ‘loitering’ because he was standing in [a] driveway, an act which the officers admitted was done only at their command.”

In 1971 that ordinance was finally challenged, brought to the Supreme court in Papachristou v. City of Jacksonville with a combined five cases, including the one above. After three months of deliberation the ordinance was deemed “void for vagueness” and unconstitutional, with one judge saying: “Here the net cast is large, not to give the courts the power to pick and choose but to increase the arsenal of the police.”

The result was the setting of a precedent that extended throughout the country allowing vague laws to be struck down as unconstitutional. But laws criminalizing those who were jobless, or poor, or sleeping on the streets, did not stop. Laws instead developed to become more specific, breaking down each undesirable activity associated with people experiencing homelessness into its own law.

Some of these even more specific laws have been challenged in recent years successfully. In 2015, Norton v. Springfield deemed most panhandling laws unconstitutional, considering them entwined with free speech. So many current laws are problematic though that there is an annual report by the National Homelessness Law Center — called Housing Not Handcuffs — describing many of them; it is over 100 pages long.

In Los Angeles, rather than arrest someone for sleeping in their car they passed an ordinance prohibiting sleeping in a car “between the hours of 9:00 P.M. and 6:00 A M. on any Residential Street; or at any time within a one Block radius of any edge of a lot containing a park or a licensed school, pre-school or daycare facility.”

“51% of cities have at least one law prohibiting sleeping in public.”

San Francisco had an ordinance prohibiting sitting on the sidewalk. Rather than repeal it when it was brought to the Court of Appeals for the 9th Circuit in 2018, they amended it to only be enforced “against any homeless person on public property on any night when no shelter had an available overnight space,” according to the panel.

Even still, the ordinance was deemed unconstitutional as “homeless individuals could still be turned away [from a shelter] for reasons other than shelter capacity, such as for exceeding the shelter’s stay limits, or for failing to take part in a shelter’s mandatory religious programs.”

The constant revisions and upholding of these laws reveal a state-wide and federal attitude towards people experiencing homelessness — these people who have fallen through the cracks of the system.

Did people experiencing homeless really fall through the cracks though, or was the system stacked against them?

These laws restricting people experiencing homelessness did not happen accidentally. They methodically were introduced, voted on, passed and enforced. It took a federal court of nine states to decide that the law against sleeping outside in San Francisco was cruel and unusual punishment.

Their conclusion stated: “We consider whether the Eighth Amendment’s prohibition on cruel and unusual punishment bars a city from prosecuting people criminally for sleeping outside on public property when those people have no home or other shelter to go to. We conclude that it does.”

Yet still, according to the National Homelessness Law Center, as of 2019 “51% of cities have at least one law prohibiting sleeping in public.”

The McKinney–Vento Homeless Assistance Act, put into law in 1987, was “the first — and remains the only — major federal legislative response to homelessness,” according to the National Coalition for the Homeless. In the law’s findings, it states: “the Federal Government has a clear responsibility and an existing capacity to fulfill a more effective and responsible role to meet the basic human needs and to engender respect for the human dignity of the homeless.”

“However,” the National Coalition for the Homeless also states, “after more than a decade of an emergency response to a long-term crisis, it is clear that only by addressing the causes of homelessness — lack of jobs that pay a living wage, inadequate benefits for those who cannot work, lack of affordable housing, and lack of access to health care — will homelessness be ended.”

For those who are homeless to really fall through the cracks, there needs to have been a system that could have caught them at all. Or rather, a public with the empathy to want system, and the passion to pressure their government to do it.