Isn't It Funny What Kids And Dogs Do? 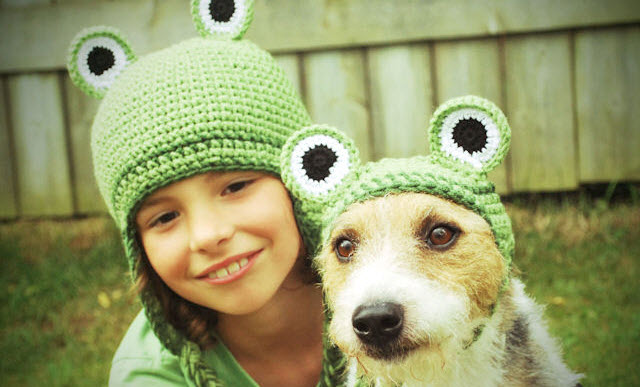 I had bought a second “Fluffy” that’s what we call her…at least I do because Lady can’t talk. Lady is a 6 month old chocolate lab. Fluffy is a soft white toy covered in a fabric that looks like lamb’s wool. There is a black loop that is used to hang these things on the rack in the store…and that’s her favorite part of the toy…at least until she has it all chewed off.
Kids are so happy with the boxes that their presents come in. I have loads of pictures, as you have too, of the kids sitting in boxes, boxes on their heads, cylinders on their arms…all the parts again that either aren’t necessary for the use of the item or what we would throw away.
Speaking of throwing away. a couple of years ago my daughter and grandson saw this orchid plant thrown away in a junk pile. Cathy liked the pot and Johnny thought I would appreciate the greenery of the plant. It sat on my porch for the longest time and I thought of the love that had gone into that greenery I had been given. Well in time, I gave the pot to Cathy but kept the plant and since then I have had I think four beautiful bloomings. Now the spires the blossoms are on have forked and I have double the amount of beautiful huge white orchids.
The world, my friends, is filled with “fluffy” loops, junked items and cardboard boxes…better known as the less fortunate. Some are fortunate enough to actually have a home to live in. Notice I said home, not house. A house is a structure that usually has a floor, four walls and a roof. A home is what is inside that structure…no matter how frail and unattractive it may be. But many of these unfortunate people have no home, no place to belong, no place to be secure, no place to be sheltered. These are the homeless. Some for whatever their reasons choose to be perpetually on the street but others find themselves in a shelter. Some come voluntarily out of a temporary need and others come out of chronic and long lasting despair and need. Some come from hospitals. Some are brought by the police. Some are even directed on their release from a correctional facility.
There is a reason why people become homeless. Ten years ago when I first started here at the shelter I was so in love with the homeless, I thought they “could do no wrong”…but my eyes have been opened.
Yes, I know that most of them have mental issues. And a good many have physical disabilities that have interfered with working and stability. A very many of them have tried to self-medicate themselves with drugs and alcohol and the addicts who didn’t do that, just were stupid enough to try it and like it and were too weak to get out of the situation.
I was just cleaning out my documents and came across this one that I started on Jan 22 2011…just a year ago. Looking at it now, I really don’t think there should be any more to add. In this year that just passed I too could be living in a homeless shelter if not for the fact that when my husband passed away, he left me financially sound so much so that in the past years I could volunteer for the most part at COSAC. I am blessed with a family that loves me and watches over me and prays for me, as well as their friends and their churches and the people who live in our homeless shelter have done for me. You see, healthy as a horse Lois, who never catches so much as a cold ended up in the hospital with (unknown to anyone) pancreatic cancer. Thanks be to God and all the prayers that have been asked of Him, I am doing very well, much better than anyone expected, especially my family who thought they lost me at one point during surgery.
Count the blessings in your life and be thankful…thankful for yours and yes be thankful that you are not one of “Fluffy’s tags”…but DO be kind to them in thought, word or deed. May this New Year ahead of us be a happy and healthy one for us all and remember that this little story of my illness proves again: There, but for the Grace of God, go I!
Thanks, Lois Cross