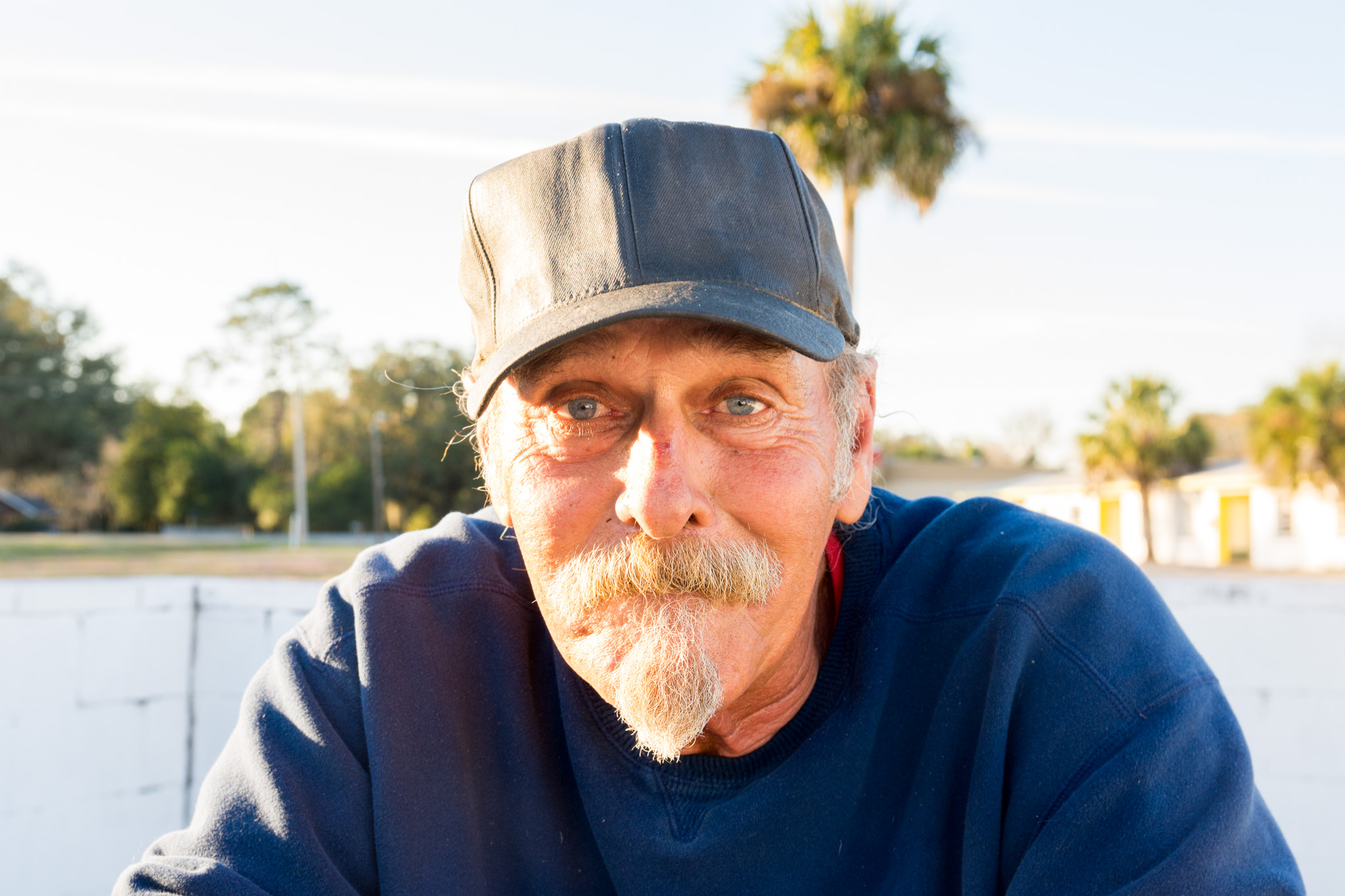 Billy Albert’s favorite color is midnight blue. Or maybe maroon too. It’s a hard question he says. This, after elaborating on a bath salts twitching person in the fetal position that he came upon and was able to help.

Helping people in bad situations, mostly the homeless, has become his job and his every day. Having been at the shelters for about ten years — between the COSAC Foundation’s previous Hollywood shelter and now Veteran’s Inn in Lake City — he has taken many jobs.

In the past — at the shelter — he’s done “security for about four years, every evening, no problem with that. Made sure everyone was safe, not preyed upon by the world,” as well as “three nights a week I would work the front desk.”
“I’ve worn many hats so to speak,” Billy says.

Farther into the past, he held the hat of a military man in the Air Force. Billy served from 1978 to 1987 as a Still Photography specialist in the 380th Bomb Wing, part of the 45th Air Division. He spits out these numbers without hesitancy, numbers that make no sense to me, but define his service to him.

Afterwards, he shed the helmet of the military and donned the cap of a photo-mechanic at a printing company in Pompano, then making sets and eventually taking product photos himself. It was a job — he at one point did work on the 1980s Olympics in Lake Placid — but also a hobby of his.

“One time, I took a picture of a squirrel sitting in a tree and what happened was, I took the picture and made an ortho [red-insensitive photo on film] of it. It came out unbelievable where the background was completely white and the tree and squirrel was just black, but with detail! That one was my favorite.”

Eventually, he ended up not wearing a hat all, “I lost my residence and went to visit my brother working at a labor hall. I was living in cardboard for three years while I was working in that labor hall. I’d be helping my brother, sometimes mentally, sometimes financially.”

He elaborated on the cardboard after I asked, “I lived in between a big V in a tree with cardboard above me, and the cardboard was plasticize — rain wouldn’t get on me. And I had moskovi ducks as my alarm clock, they have to be the earliest risers in the world — I’d be the first in line for job opportunities.”

Eventually his brother brought him to the Homeless Voice in Hollywood where he took his first hat as security.

Now though he works the paper, “Day to day, well, I go out and sell the paper; I mostly coordinate where we put it. We are trying to open up more places so when we get new people they know who we are, so it doesn’t look like we are just asking for money.”
But this not just a job to Billy.

“It’s helped me, it’s seriously helped me. I felt like I was contributing something for the greater good so to speak, I was helping people who were there, that needed it. Right now, when they need help, I help.”

The paper is meant to raise awareness and inform people about the homeless, it’s also a way of giving people who come to the shelter work. This is the hat he wears today, and “the more people are informed the more they see that it is for a greater good for those who can’t help themselves,” Billy says.

He revels in his job, taking care of the people at the shelter, and doing whatever he can to help. “I enjoy when people tell me what we’re doing is good. We are helping people into the shelter that need it and off the street.”

I had a second interview with Billy where I was able to meet him in person. At 67 years old, he has a very youthful sounding voice behind his blue-gray eyes. After awhile another client at the shelter came over and Billy asked if he’d gone to the doctors.
He had not, and Billy was quite concerned.

“Are you kidding me! Man, you make sure you eat something. I’m serious, you may need to go to the hospital, I mean that, seriously. I don’t want you caving in on me on the street there, God forbid. Seriously, you know that.”

As the client left, I asked Billy for another story of him helping someone.

“Like the time I got my hip broke? Well, some guy was beating the heck out of some girl — his girlfriend I guess out in front of the place — and I went out there to just look and find out what was going on. The guy came over to me, you know, and gave me the bum-rush and I go flying through the air and when I come down my femur — the top of my femur — is fractured. So I was screwed up for a little while, that’s why I walk with a limp for the rest of my life.”

He continues to don many different hats for the shelter, some new like helping renovate the COSAC Foundation’s recently bought motel, but old and necessary hats too.
“I still do the laundry, the shirts, make sure everyone has the papers they need, water, their lunches. That’s my heart and soul, to put on a good face for this.”