Why People Sleep Outside 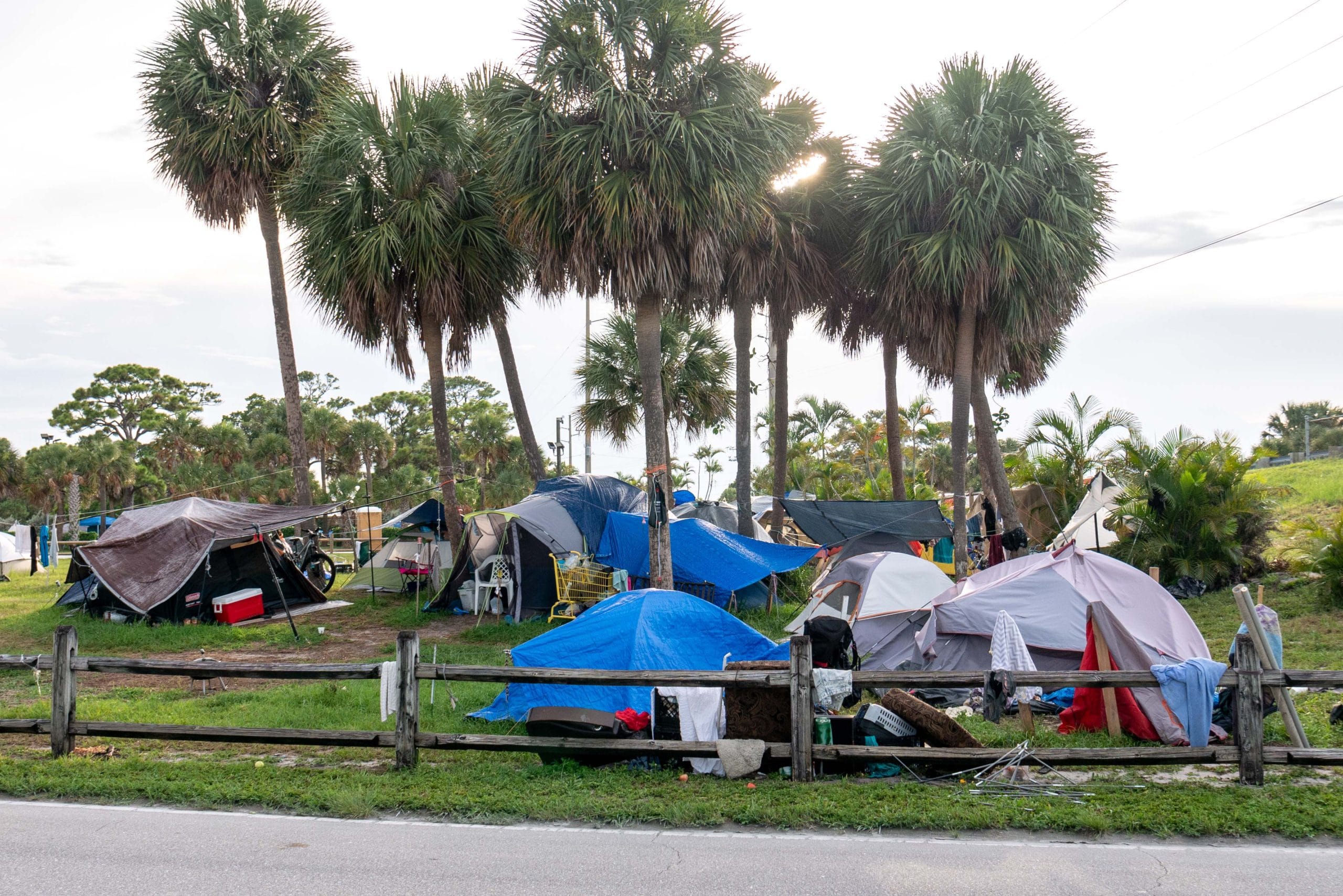 Many people have questioned me as to why I’ve slept outdoors for over ten years. Professors, social workers, classmates, recovery support groups, and well-meaning individuals have encouraged me to seek shelter, but I can come up with a dozen excuses for continuing to camp out. And I’m not alone.

Like myself, most of my friends have repeatedly struggled with failed attempts to get off the streets, before finally adapting to outdoor living and resigning themselves to long-term homelessness. No, this doesn’t necessarily mean that we choose to remain homeless. The resources simply aren’t available in Palm Beach County.

Contrary to popular belief, there aren’t any emergency homeless shelters in Palm Beach County. Instead, there is the Lewis Center, which is a federally funded homeless resource center that offers up to 90 days of shelter followed by a referral to a long-term transitional housing program — such as the Lord’s Place or Project Succeed.

I’ve tried to seek services through the Lewis Center on multiple occasions. In 2013, I was referred to the Lewis Center by law enforcement and stayed for an overnight assessment. I was denied homeless services because I was attending college on financial aid, which meant there was a conflict in federal funding. I was told that I had to drop out of college to receive homeless services, but I think that policy may have changed in recent years.

Another time, I sought homeless assistance, but was told that I would have to pay for housing myself because I received Supplemental Security Income (SSI). However, the current maximum SSI benefit is only $794.00 monthly, which isn’t even enough to afford rent.

Finally, I made it into the Lewis Center for a 48 hour assessment and was placed on the waiting list for an apartment through Housing First. I was told that I would have to return to my camp and they would contact me once my name reached the top of the list. I was proactive and called to follow-up, but was informed that they cleared the waiting list at the end of the year before my name had ever come up. I needed to be reassessed to go back on the list. Eventually, I gave up.

Recently, I reached out again, but was told that I needed to obtain an updated homeless certification letter — a formal letter from a shelter proving one’s homelessness — to be assessed for homeless services. Since I’ve been busy with school and my work as a blogger, I haven’t been able to spare enough time to frequent homeless ministries and obtain the requested documentation. Additionally, my income has slightly increased this year, and I once again receive financial aid, so I doubt that I’ll even qualify for assistance.

My friends have struggled with the same hassles. One friend tried to obtain a homeless certification letter from a homeless ministry in Lake Worth, but was told that he had to visit the ministry regularly for three months before they would give him the letter. St. Ann’s Place requires that homeless individuals visit their ministry for 30 days before they’ll issue a homeless certification. Changing Lives of Boca requires active participation in their program, which includes weekly check-ins and attending their Compassionate Care ministry.

Homeless people in Palm Beach County need to jump through a lot of hoops just to obtain food and shelter. In the meantime, we face arrest for panhandling and trespassing charges. How does the County expect us to survive?

I’ve never known a person to be arrested for vagrancy in Palm Beach County. Instead, there are “No Trespassing” signs placed everywhere throughout the county. If law enforcement catches a person sleeping in public, they arrest them for trespassing instead of vagrancy or public lodging.

To me, that seems like a fancy way to avoid compliance with the federal ruling of Jones vs. City of LA, in which the Supreme Court ruled it to be a violation of the 8th Amendment on Cruel and Unusual Punishment to arrest people for sleeping in public unless the city provided adequate shelter to house all homeless people within that city.

According to the latest homeless count, there are 1,510 people sleeping on the streets in Palm Beach County on a given night, yet the Lewis Center only has a total of 180 beds.

I’m sure that the Lewis Center does help many people overcome homelessness, but only a few friends of mine were fortunate enough to get into the program. They didn’t last very long though. Palm Beach County offers minimal substance abuse and mental health services for the uninsured, and simply being caught drinking a beer can result in being kicked out of the Lewis Center or halfway houses.

Halfway houses are viable alternatives to the Lewis Center, but many of them require private insurance, while others are just flophouses. I was fortunate enough to find New Path, which is a good women’s halfway house with a reasonable rental rate. However, I left the halfway house twice because I missed my husband, who was still homeless. The last time I was there, I was kicked out for relapsing on alcohol following an argument with my husband. Each time, I forfeited the rent that was paid, leaving me homeless — and broke.

I’ve known many couples who have refused homeless assistance because they don’t want to leave their significant other behind, as was the case with me when I was homeless with my husband for 10 years. I’m more than welcome to return to New Path Halfway House. The director has clearly identified my problem as being men, but I want to be financially situated beforehand and ready to commit to my recovery. Otherwise, I’ll just continue to waste money.

Since I have income, why don’t I just rent an apartment? I tried that several times, too. For a while, I was receiving lump sum disbursement checks from school every semester to cover my living expenses, and my husband was employed as a subcontractor. When my checks would hit my account, my husband and I would excitedly rent a weekly motel room and embark on our bi-annual apartment hunt. Only the landlords repeatedly denied our rental applications due to credit and background issues. Eventually, we gave up on that, too.

My friend Clark went through a similar experience. He told me that with 6 felonies, he couldn’t even rent a dog house. After being homeless for many years, he was offered a job opportunity on the West Coast. He said that he walked around with $3,000 in his pocket for 4 months, being repeatedly turned down by landlords because he had a criminal record, and his girlfriend had a foreclosure on her credit. Finally, they found a place, but had to settle for a 2 bedroom that costed more than their agreed budget.

Of course, we could always get creative like my friend Bigfoot. He built a house in the woods for himself and his long-term girlfriend. When I mentioned homeless services to him, he pointed at his makeshift home and replied, “I’m not homeless. I have a house!”

Understandably, landlords want to keep their properties safe and ensure that they can depend on the monthly rent. Also, Palm Beach County is amongst the most desired places to live, so it makes sense that the rental rates would be outrageous. But if landlords are going to charge high prices and impose stringent restrictions on rental applicants, then communities have no right to complain about people sleeping outside. After all, we need to sleep somewhere.

As Clark once told me, “God gave us all a home. It’s called Earth.” Sure, some people aren’t fortunate enough to afford a house or make it into the Lewis Center, but if we aren’t leaving trash around or causing any problems, leave us be, so we can get a good night’s rest. Who knows? Maybe tomorrow will be a better day.