At what point does being homeless become homelessness? Federal law has a definition, and states have varying ones as well, but it’s not as simple as that.

Living in a car, for example, is not considered a first choice, it’s usually done from necessity. Van life, on the other hand, is the opposite — with vans purposely and painstakingly transformed into cozy and unique abodes on wheels. But wherein lies the difference? The circumstances? The sense of adventure rather than a forcing of one’s hand? When do they become homeless?

To Channing Kaiser, who has spent months in the past living in her car to travel through national parks, it’s a matter of perspective, “I guess for me, I think of the homeless as those not always having a choice, but when you’re forced into it. My car really was my home for that stretch of time, but I had a way out of it if I wanted.”
And this concept of “having a way out” can be significant.

“I’ve had varying degrees of housing insecurity since I was 17 (9 years), and the line I’ve found with homelessness is that, even if I knew rationally that something would eventually get me out of my car, out of couch surfing, etc., there seemed to be no end in sight,” says Jay Mateo.

Mateo has traveled extensively in his car, sometimes by choice — like from San Diego to Boston and back — other times not, “[The road trip] was more of housing insecurity and very much a choice I made. In high school, though, I stayed in my car a lot and I’d consider that homelessness — I mostly had no options and definitely couldn’t leave, and I think something about homelessness is it feels future-less and unknown.”

The emotional toll can come for the lack of preparation for being homeless as well, and the laws that dictate where and how to be homeless. The example of living in a car is a significant one as it’s common, and the legality is vague and changes depending on city.
Generally, the problems with living in a car is not the physical act of sleeping in it, but the numerous situations the car can find itself in. Sleeping in a car in a personal driveway, or a consenting driveway of someone else, is not generally illegal. But parking a car overnight in a public park during its closed hours can also be considered trespassing.

The NYTimes reported on a family that could no longer afford rent in Los Angeles after a raise in monthly cost, so were forced to live in their car. They had the worry of losing their two children by their living situation being deemed unfit, and they’d constantly worry when they saw a police cruiser that they might notice their lived-in looking car. The article says the mother was “overwhelmed with shame and anxiety.”

This mental strain is different than voluntarily going into that situation, “The security about it, if it’s a chosen thing, you know if things went wrong, you know you have that support. In general, I think some people who are homeless are because they don’t have the support, which is a privilege we have that others don’t,” says Kaiser.

Part of that lack of support can be when the car someone is living in breaks down. Mateo says he’s lucky and hasn’t had a car completely stop working while living in it, but “definitely cried a lot over bills that were upwards of $900.” A broken car could be detrimental when it’s also their means of transportation, “I definitely feel a lot more helpless when I can’t have complete control over my housing.”

“…Even if I knew rationally that something would eventually get me out of my car, out of couch surfing, etc., there seemed to be no end in sight,”

Part of the intensity of the worry for the family in Los Angeles was because their laws are more straightforward on the legality of sleeping in the car; a city ordinance was reinstated in July of this year that specifically bars sleeping in a car overnight in many parts of the city.

In other places it isn’t as clear cut, so both Mateo and Kaiser have had to develop their own tactics, “I never park alone in a lot or on a street, so whenever the cops come it’s always with not enough interest to bust everyone in the parking lot, they just say you can’t be there,” says Mateo. “I always knew the rules for parking the cars really well, so I knew I wouldn’t get a knocking on my windows,” Kaiser explains.

Continuing, she says, “Me living in my car was for a sense of adventure, and it’s a popular phenomenon to live out of my car. If this doesn’t work, I have money, I have my parent’s home, I have that to fall back on unlike homeless people. I guess it’s a lot of perspective and knowing that you’re choosing, like vanlife is a whole phenomenon and they don’t see it through the lens of homelessness.”

A more developed version of voluntarily sleeping in a car, vanlife can seem luxurious through hashtags and instagram filters that millions follow —  #vanlife alone has 6,175,158 posts not including #vanlifediaries with 1,196,327 posts and #vandwelling, #vanlifeexplorers, #vanlifeeurope, etc. Travel bloggers have made a living showing off their builds and documenting their journeys.

As Kaiser says, they don’t see through the lens of homelessness, and when asked, neither does she for her travel, “I feel like it’s because I have a stable family home to fall back on, and I’ve voluntarily left to travel so I don’t identify as being homeless.”

In Kaiser’s case, she was traveling for a long period of time, it just happened to be in her car that she slept. It was not the attitude of being forced to do it out of necessity, or running from something — which she was misconstrued to be doing multiple times in her journey. This long-term traveling though leads to another dichotomy.

If someone purposely throws themselves into a long-term travel situation, far from home, with little money, are they homeless? This person can easily be someone in a down-and-out type situation, but they may have done it on purpose.

Kaiser comments on an example of through-hiking the Appalachian Trail — which generally takes about six months — saying no, “It’s a chosen adventure, and you still have a place somewhere. So much of this is about choice and perspective.”

“I think with traveling for the purpose of exploring qualifies more as minimalism,” says Mateo. “…but it’s hard to say. There is the case of migrant people who end up with gig work but that lifestyle is coded differently because they’re usually people of color. I frankly don’t know where homelessness begins and ends.”

The concept of homelessness greys at the edges when it becomes an aspect of perspective. When people voluntarily go out with little resources it can be hard to be seen as homelessness, but if it suddenly goes out of their control, like Kaiser’s car possibly breaking down, it can become a different issue, and a different perspective for them.

Mateo does eventually elaborate on his thoughts further, “I’ll say that, because of the cultural connotations of ‘homelessness,’ it carries a lot of weight to identify with that. So, even if someone is technically transient or address-less, I think the most important part of the classification culturally is the extreme poverty and that associated inescapable cycle.”

This cycle can be stressful, not knowing where they can sleep next, not knowing if they’ll have housing next month, or even next week. “I think it’s a mindset for most of it, when your young too there’s more adventure to it, you don’t have to worry about changing school districts for your children. It’s different as a short-term change, you’re not looking for government support or anything,” says Kaiser.

Homelessness is grey, it’s a scale, people experience it differently. Some people have money to eat, even go to school, might have a job, but can’t afford a home. Money is a huge factor where someone can have just enough to eat, but not a home. Maybe they’re hopping couch to couch. Maybe their real home is too far away and they can’t get there. The variation of issues that can cause someone to be temporarily homeless, or traveling homeless, or couchsurfing homeless, are wide and varied.

The line where someone can slip from feeling they have a way out to feeling trapped is easily made too by the stalling or impounding of a car, or a stolen backpack. There are people in these situations who have not voluntarily gone into them, who haven’t decided to go travel, who haven’t decided that living in a car is what they see as adventure.

“I think with homelessness there’s an impulse to say ‘well, it’s not a choice,’ as validation for those experiencing that level of poverty — but I think even if it is a choice — like sleeping in something that moves, it’s born mostly of the fact that it’s incredibly difficult to become stable or get an address in this money money money culture, the same culture that puts people on the sidewalk or staying on floors of their extended family’s house,” says Mateo.

For a lack of options or adventure, it’s a significant change to go into any of these situations, and there are people, like Mateo, who have gone into it for both reasons. He made it clear though that they were different situations, and felt different. There won’t be a single answer to where the limits of what’s defined as homelessness are with these grey situations, but at least they can be seen. 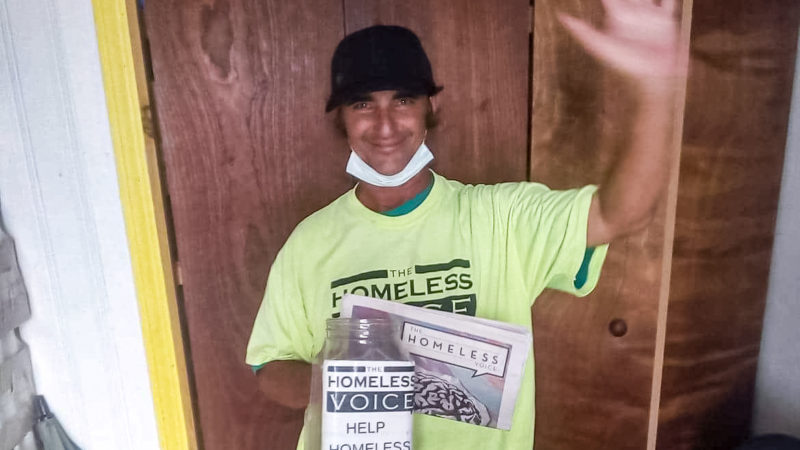