The Cycle of Buying the Same Blanket Over, and Over 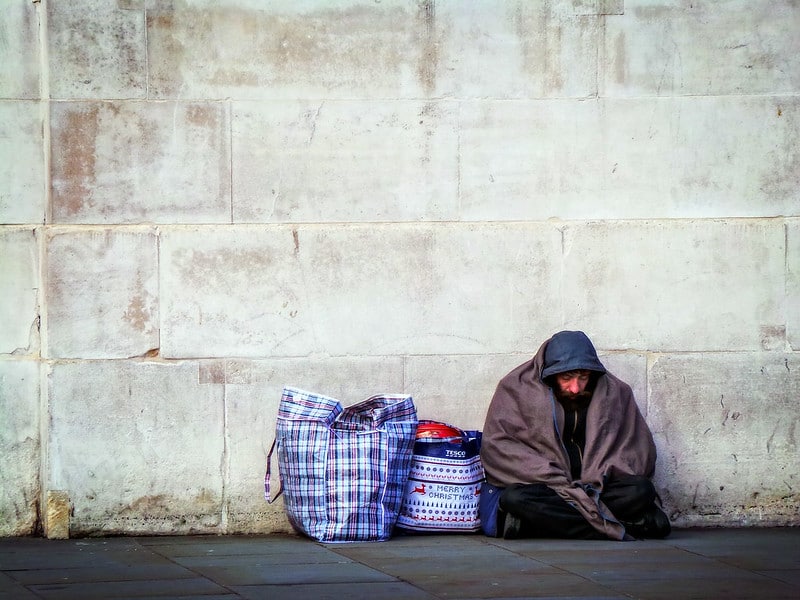 I was recently picked up on a warrant for damaging property in the midst of an anxiety attack.

Spring semester has just begun at Palm Beach State College and my focus has shifted more on school and less on writing jobs, so money has been tight. I went out to the median to panhandle some money for food when I was stopped by law enforcement. Apparently, there was a warrant for my arrest. I was shocked, if I’d known I would’ve stashed my belongings.

Instead, at the time of my arrest, I had my purse full of personal items and my backpack containing my laptop and notebooks. When I was released, the property clerk only gave me my medication, phone, and Florida ID back. I panicked! Where were the rest of my belongings?

A few phone calls later, I discovered that my belongings had been stored at the evidence department because I had too many items in my possession to store in property at the jail. Although I’ve had difficulty retrieving them thus far, and the situation has been a major inconvenience, I truly appreciate the officer taking the time to inventory my belongings, and I have the peace of mind in knowing that my possessions are in safe keeping.

Many of my friends have not been so lucky.

My friend, who I’ll call King David, has been arrested twice for panhandling, and both times the arresting officer left his backpack lying on the median. While I’m fortunate to have a camp to store my belongings, King David carries all his meager possessions in his backpack. When he was released from jail the next morning, he had nothing left to his name.

He expressed deep anger to me about this, but fortunately he’s a laid back guy with a good sense of humor. Despite his resentments, he keeps moving forward and starting over from scratch.

Sadly, he’s not alone. Another friend of mine, Fran, had her purse left behind by the police during a panhandling arrest. There have also been multiple occasions where I have approached an off-ramp and seen a homeless person’s backpack laying there unattended. Obviously, they had been arrested and their belongings were not taken to jail with them.

From my recent experience, I have concluded that there may be a limit to the amount of items that can be stored with the property clerk — additional items may need to be logged in separately and stored in another location. Apparently, some officers may not want to put in the extra work though, and many people may assume that a homeless person’s belongings couldn’t possibly be valuable.

Literally, maybe so, but those items are often the only things that they have to their name.

Now, there have been several instances where the arresting officer has given a friend of mine the opportunity to stash their backpack in a nearby bush or give it to a friend of theirs before taking them in. I have held onto my friend’s backpacks and bicycles on multiple occasions. In my opinion, the officers were reasonable in these situations, but if the person’s possessions can’t be secured, it is only right for the officers to log them in and store them safely until the person’s release.

Occasionally, a homeless person may return to their camp spot to discover that their tent and belongings are no longer there and have obviously been discarded by the police. Although I know of a few homeless people that have experienced this misfortune, it hasn’t happened to me personally. Instead, there have been a few times when I have awoken to an officer at my camp giving me a 24 hour notice, or have returned to my camp to find a sheriff’s business card attached to my tent.

I strongly encourage officers to give sufficient notice to the homeless to move their belongings and campsites as these officers did. Often, tents are the only source of shelter that a homeless person has and discarding the tents usually forces the person to move to shopping plazas, which results in complaints from businesses.

Police officers aren’t the only people who regularly discard the belongings of the homeless. Often, homeless people will stash their backpacks or bags of bedding in bushes, and if a business owner or property maintenance happens to discover the bags, the items will usually end up in a dumpster.

It seems to me, every year, survival has become harder for the homeless in Palm Beach County.

My friend, who I’ll call Cowboy, never liked camping in the woods, instead preferring to sleep in shopping plazas, which he called the “concrete jungle.” This meant his bedding was usually stored in bags and hidden behind bushes in these plazas. There were several times when I ran into Cowboy and he was fuming mad that the maintenance men discarded his possessions once again.

Sure, businesses probably have the legal right to discard items that have been stored on their property without permission, but this doesn’t mean that getting rid of a homeless person’s possessions is morally right. As long as the items are well-hidden, out of the sight of customers, and aren’t interfering with lawn maintenance, leave them be.

While there are still some homeless people who avoid this scenario by pushing shopping carts around containing everything they own, that strategy still comes with a price, like increasing the likelihood of the person being run off from properties, or refused service at businesses.

For instance, I met an elderly homeless man this past Christmas who had ten shopping bags filled with his belongings and attached to his walker. That night, he was chased off from the bench he had been sleeping on and refused service at two restaurants. Sadly, a homeless person has a better chance of survival and acceptance if they don’t look homeless, which means that they need to stash their bags somewhere.

It seems to me, every year, survival has become harder for the homeless in Palm Beach County. Especially with the tougher panhandling laws, some homeless people have even begun to steal from one another — my friend Dilo has experienced this repeatedly.

Recently, another homeless person stole his bags of blankets and clothing that he had stashed. He told me that he understood that the person may have been cold and needed a blanket, but that they should have at least had the decency to leave him a change of clothes. He plans on panhandling to come up with enough money to go to a local thrift store and buy more clothes and blankets.

Which brings me to my final point: even though the belongings of the homeless may not be valuable, these items are often necessary for survival, and unless the person has a legitimate source of income, they are likely to engage in petty crimes — such as panhandling or shoplifting — to replace the discarded or stolen items. While there are ministries that may provide clothing, personal items, and blankets to the homeless, these places are only open on certain days and supplies are usually limited.

When the meager belongings of the homeless are discarded, survival becomes even more challenging, and they often become stuck on a hamster wheel of needing to continuously replace the same items over and over again. Not only does this make it harder for them to get on their feet, but it often forces them to continue to commit minor survival related crimes, and the cycle never seems to end.

I’m asking law enforcement and business owners to please stop discarding our belongings. I’m also asking any homeless people who are reading this to please stop stealing from one another. Instead, we need to stick together and help each other out. It isn’t easy to live on the streets or meet basic needs as it is. Discarding a homeless person’s meager possessions is just plain cruel, and only makes survival that much harder.