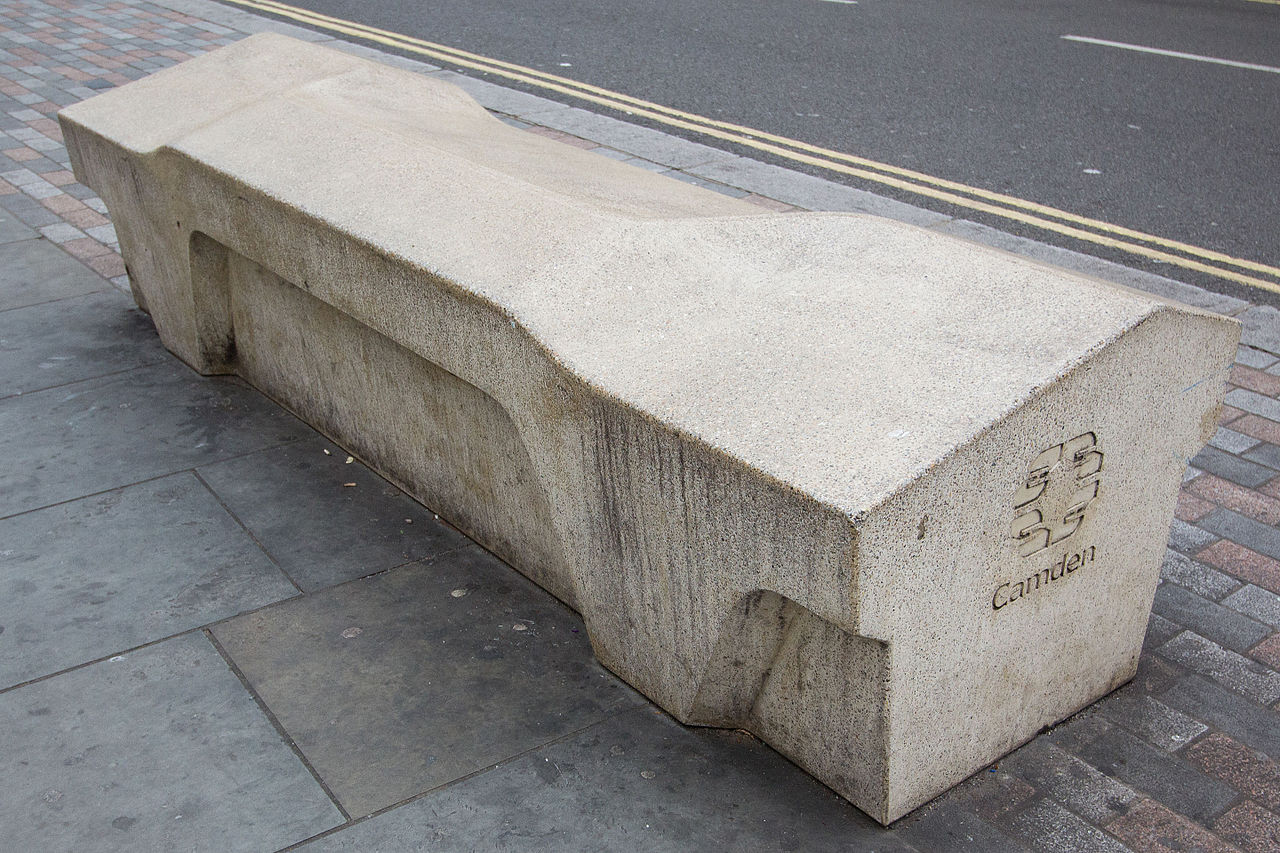 Unwanted behaviors like skateboarders roughing up ledges, and unwanted people like the homeless sleeping in public places; public property being used by the public, but cities fighting back through hostile architecture nonetheless. The idea of architecture in public places manipulating certain peoples and behaviors isn’t new, but it’s hidden and affects everyday lives like the homeless who depend on a park bench at night.

This fight exists as anti-homeless spikes, put on large windows sills and along the ground, bum-proof benches with armrests and ridges to prevent laying on, and even as simple as bus stop benches with only a backrest. It’s subtle changes that may go unnoticed by someone who doesn’t spend most of their time there.

A research paper titled “Hostile urban architecture: A critical discussion of the seemingly offensive art of keeping people away” by Karl de Fine Licht debates the ethics of it. Mostly on possible harmful effects of the architecture to the public in general, but declines to make a definite decision. It does make clear that these designs hinder the ability to lay down to sleep, and even aim to “dissuade panhandling.”

Included in the paper’s examples of hostile architecture are variations beside a change to existing physical objects, such as judding rocks under bridges where the homeless might find shelter. It might be an addition of a new object, something less conspicuous than spikes — like a large potted plant — put where panhandlers might congregate. Another example is a lack of benches at all in places like a mall.

The paper’s largest focus is on the existing argument as to whether defensive/hostile architecture is harmful to the well-being of the general public. Whether the architecture hinders the homeless in public spaces is just accepted as a consequence without argument.

The benches have changed so the homeless can’t lay on them, but generally passersby can sit without noticing anything other than an odd shaped bench. Corners of building and grounds will have spikes on them, but pedestrians wouldn’t be walking over there anyways. The ground under bridges have boulders molded into them, but the average person doesn’t seek out those places, so would never notice.

All around this architecture goes almost unnoticed as it changes the way streets look and changes how people function in them, but some research it, and others write on it. The research paper being only one of many writings on the camouflaged hostility.

The BBC published a piece back in 2013 interviewing Selena Savic, a co-author of an entire book on hostile architecture called “Unpleasant Design.” The book is no debate on ethics, it is a look at how this way of building away certain behaviors is a factual hindrance — citing much of the same examples as above.

There is even a website, Hostiledesign.org — run by Stuart Semple, a British artist — dedicated to bringing attention to these “designs against humanity,” as it says on the homepage.

With its angles, sleeping atop it is practically impossible; with its anti-paint coating, graffiti is impossible; its lack of crevices is claimed by its creators to deter drug-use as there is nowhere to hide anything, and there is no back rest.

Another issue with these designs, and with a bench as armored against the public as the Camden bench, is that “they are non-negotiable,” Savic said to BBC. “If you have a policeman prohibiting people to sit somewhere, you can still fight with this policeman, or argue with him, you can do things. When you have a bench that has armor, you can’t really as a human do anything about it.”

The public is seen by these writers, researchers and artists as the victim. Semple, on Hostile Design, says “It often attacks the most vulnerable people in our community, regularly the homeless,” which is a mirrored sentiment in Savic’s book as well. To Semple, it’s no debate, “it sends out a very clear signal, that certain people aren’t wanted.”