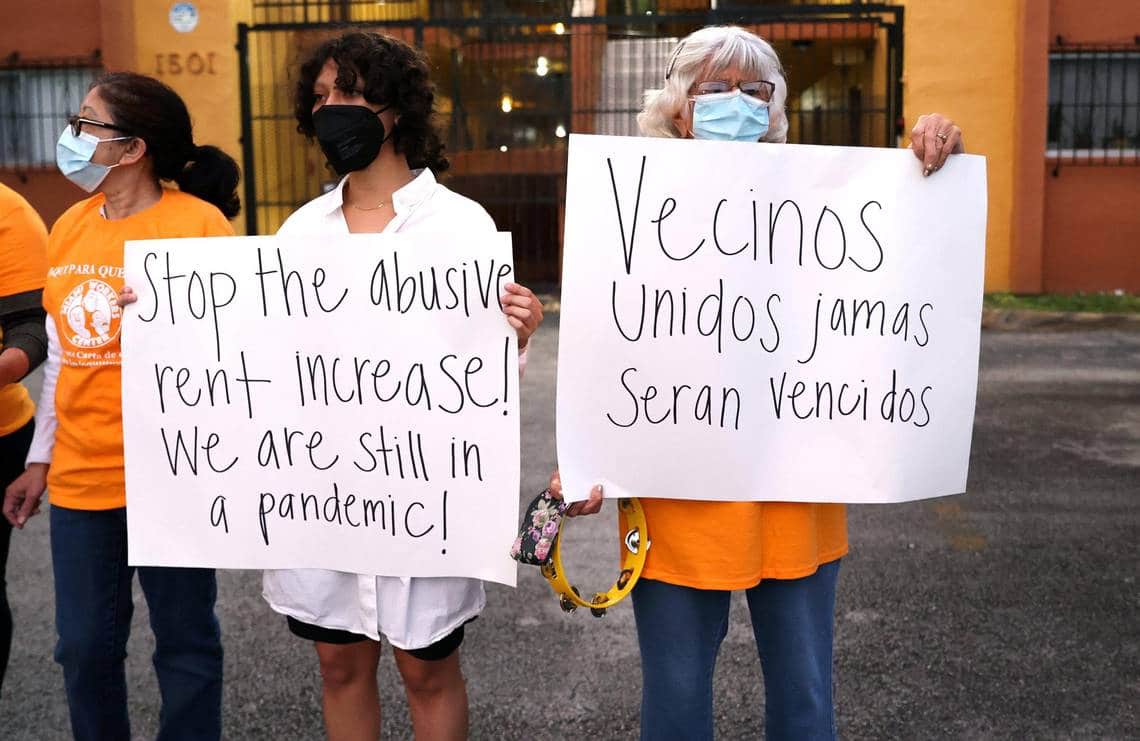 Hialeah tenants protesting up to 65% rent increases from new landlord. | Photo by David Santiago, Courtesy of The Miami Herald

Despite Over 80,000 Eviction Filings in 2020 alone, one report finds Florida cities outpacing the nation in rent increases while hundreds of thousands of households are already behind on rent

The rent moratorium ended months ago, and in recent weeks, people in Tampa have been evicted while waiting for already approved rent relief from the state, and others in Miami have taken to protesting due to rent increases of up to $650 from new landlords.

2021 saw massive rent increases in major cities across the country, but according to a report published by apartment rental site Zumper, in 2021 Miami surpassed even New York in median rent growth compared to 2020, increasing by 38.2% — New York rose by 32.4%. Florida is far out-pacing the rest of the country, and of the top 100 most populous cities, Miami, St. Petersburg, Tampa, and Orlando were in the top 10 for highest rise in rent in 2021.

The pandemic-caused crash in rent costs have not only returned to pre-pandemic levels, but exceeded them, and Florida tenants are being evicted because of it.

Data analysis of census data from late September to October by the National Equity Atlas, a research group associated with the University of Southern California, estimated that 380,000 Florida households were behind on rent, with a total estimated rent debt of more than $1.1 Billion. Almost half of those households are unemployed, and 84% have a salary lower than $50,000 according to the analysis.

Of that rent debt, Miami-Dade county held the most, at almost $230 Million from 67,197 households.

But Florida’s distribution of federal rent relief funds, through their state-wide emergency relief program Our Florida, has been halting and problematic.

Florida saw only 2 percent of rent aid disbursed by the end of the rent moratorium in July. As of November, they’ve disbursed only half — that’s roughly $900 million out of almost $2 Billion set aside. Part of the program’s issues have been transparency and lack of communication according to the Tampa Bay Times, citing one woman, Catherine Owens, who tried calling Our Florida “30 times over the three months” she had a pending eviction.

Because the rent moratorium ended, evictions can be carried out even after someone is approved for support if they haven’t actually received the money yet. This is what happened to Owens: approved for assistance, but the money didn’t come in time, and she had to leave her home.

Evictions were being filed even before the moratorium ended though, as it didn’t stop landlords from filing the required paperwork to evict tenants as soon as they were allowed. Every Florida city saw consistent eviction filings throughout 2019, 2020, and 2021, though most dropped to their lowest in early to mid-summer 2020 before rocketing back to normal levels in August or September. Of the cities with the highest increases in rent, Miami saw the highest month-to-month increase in eviction filings, going from about 300 in July 2020 to 1200 the very next month.

Zumper collected data from more than one million active rental listings to determine median one-bedroom rent prices and rent growth, and it saw most cities drop in rent prices in March 2020 when the pandemic started. But by the end of 2021, Miami’s rent growth not only surpassed New York, it rose 38.2 percent compared to that drop in March.

For context, it’s median one-bedroom rent was down 10 percent in January 2021 compared to March 2020, by July it rose back to pre-pandemic levels, and then rose another 12 percent to now.

According to the same report, “the other major Florida cities didn’t see the big drop after the pandemic hit, and in fact saw rent rise considerably between March 2020 and January 2021,” meaning rent growth in 2021 isn’t playing catch-up, but rapidly rising purely for gains.